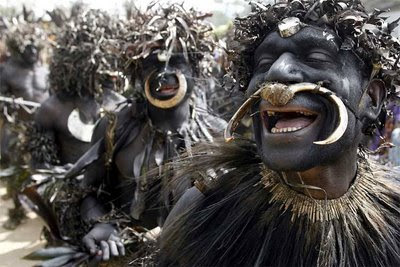 The Sambia are a people in New Guinea that have a unique culture. They value masculinity because of the life experiences that they live in. They reside in a hostile environment and are in constant battle with their neighbors. Their life is portrayed in the movie, The Guardian of the Flute. The boys need to be initiated into manhood. It primarily starts about the age of seven. They are taken away from their mothers, usually at the mother's dismay. The boys are given a mentor that carries the boys on their backs when they are too tired to walk, as they are not able to eat or sleep in the beginning to show their strength. The boys participate in a number of rituals. They are thrashed with sticks, hit on the head with branches, and brushed with stinging leaves. The boys are then introduced to the flutes. The flutes represent the penis. The blowing motion on the flute is useful in one of the final initiations into boyhood. The Sambia believe that strength comes from semen and young boys do not produce semen yet. The young boys are expected to drink the semen of the older boys to help develop strength within them and help them to produce their own semen.

It is important when looking at other cultures that we use anthropological objectivity. There are actions that are different from the ones that we make in our own culture, but it is important not to make judgments, so that we can get the most thorough and unbiased information as humanly possible
Posted by Ms. Reyes at 1:59 PM